The Red Sea Project, one of the giga-projects announced by the crown prince in 2017, is billed as one of the the world’s most ambitious tourism and hospitality projects: An ultra-luxury destination that is being created around one of the world’s hidden natural treasures.

The Red Sea Project will set new standards in sustainable development and redefine the world of luxury tourism with objectives to position the Kingdom on the global tourism map. 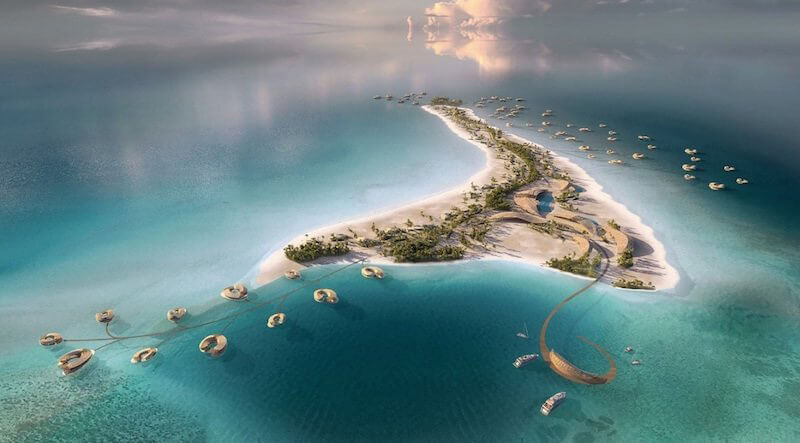 Once completed, visitors will be able to explore the wonders and rich cultural heritage of Saudi Arabia’s untouched Red Sea Coast.

This is a touristic project that includes more than 90 unspoiled islands located between the cities of Umluj and Al-Wajh. It covers a number of the Red Sea’s untouched islands and a nature reserve containing regional flora and fauna.

Situated between the cities of Umluj and Al Wajh on the west coast of Saudi Arabia, the site is strategically located at the crossroads of Europe, Asia, the Middle East and Africa and within eight hours’ flying time of 80 percent of the world’s population.

The vision of the project includes creating an exquisite ultra-luxury destination within a pristine 28,000 sq km area that includes an archipelago of more than 90 unspoiled islands, volcanoes, desert, mountains, nature and culture.

The project is planned to set new standards for sustainable development and environmental protection, exceed expectations with the highest standards of service excellence and use technology to enable a seamless personalised experience that will position Saudi Arabia on the global tourism map.

The first phase of the project, scheduled for completion in 2022, includes 14 luxury and hyper-luxury hotels providing 3,000 rooms across five islands and two inland resorts on the Kingdom’s west coast, an airport to serve the destination, and marinas, along with residential properties and recreational facilities.

By the time the project is completed, there will be 22 developed islands out of a total of 90 islands.

It is expected to create 70,000 jobs and play a significant role in driving economic diversification in the Kingdom by attracting nearly a million visitors a year and contributing SR22 billion to the country’s GDP.

Notably, plans to develop the project have been given the green light. The TRSDC has received final approval from its board of directors for the program’s master plan in January this year.

With the master plan approved, they are now identifying investors and partners who are interested in working with them on realising the objectives of the project and who share their commitment to enhance, not exploit, the natural ecosystems that make the destination so unique.

Significantly, the Red Sea project ensures protection of ecology. As part of the planning process, major environmental studies were carried out to ensure that the area’s sensitive ecology was protected both during and after completion of the development.

Furthermore, the master plan is underpinned by an extensive smart destination management system that will support a wide range of personalised products and services designed to appeal to the modern luxury traveller.

Sign up here for FREE to receive important updates by email and stay ahead of the curve for when The Red Sea Project real estate developments become available.